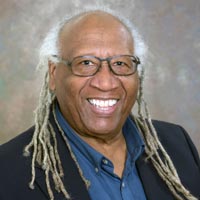 Dr. James M. Jones is Trustees’ Distinguished Professor Emeritus of Psychological & Brain Sciences, Africana Studies, and Director of the Center for the Study of Diversity at the University of Delaware. He is former Executive Director for Public Interest and Director of the Minority Fellowship Program at the American Psychological Association. As Director of the Minority Fellowship Program he won 25 million dollars in training grant funds from the National Institute of Mental Health to support the professional development of about 1,500 students of color who otherwise may not have been able to attend graduate training programs in Psychology and also Neuroscience.

Dr. Jones’s research program has focused on racism, temporal orientation and its influence on personality and the personality orientations of Black Americans that evolved from African origins and which represent adaptations to the challenges of oppression, marginalization and discrimination in the United States. In 1973, Dr. Jones spent a year in Trinidad & Tobago on a John Simon Guggenheim Fellowship studying Calypso humor which led to the development of the TRIOS Model of the Psychology of African American culture. This model involves five dimensions summarized by the acronym TRIOS representing Time, Rhythm, Improvisation, Oral Discourse and Spirituality. These characteristics are useful for coping and adapting to threatening and uncertain contexts. Dr. Jones’ research reveals that adopting a triosic self has positive consequences for the psychological health and self-esteem among Black Americans, as well as others regardless of race.