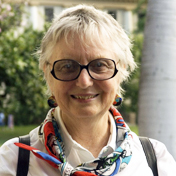 Dr. Elaine Hatfield (B.A. Michigan, Ph.D. Stanford) is a professor of Psychology at the University of Hawai‘i.  She is well known as the scholar who pioneered the scientific study of passionate love and sexual desire.  In 2012, the Association for Psychological Science (APS) will give Hatfield the William James award for a Lifetime of Scientific Achievement.   In recent years she has received Distinguished Scientist Awards (for a lifetime of scientific achievement) from the Society of Experimental Social Psychology, the Society for the Scientific Study of Sex, and the University of Hawai‘i, and the Alfred Kinsey Award from the Western Region of SSSS; The Society for Personality and Social Psychology’s Methodological Innovator Award, and the International Academy for Intercultural Research (IAIR)’s  Distinguished  Scientist Award.

For the past two decades, she has been ranked in citation reviews as the most frequently quoted social psychologist in the world.  She has often appeared on national television, interviewed by Barbara Walters, Phil Donahue, Hugh Downs, Tom Snyder, and others, and has written many books on her research, among them two books which both won the American Psychological Foundation's National Media Award: A New Look at Love  and Mirror, Mirror: The Importance of Looks in Everyday Life.

Recently, Drs. Hatfield and Richard L. Rapson (who are husband and wife) have collaborated on four books: Love, Sex, and Intimacy: Their Psychology, Biology, and History (HarperCollins) Emotional Contagion (Cambridge University Press), Love and Sex: Cross-Cultural Perspectives (Allyn & Bacon), and in the spring, their final book:  What’s Next in Love and Sex: Psychological and Cultural Perspectives.

The Rapsons have published a collection of short stories (Dangerous Characters), four serious novels: Rosie, Recovered Memories, Darwin’s Law, and Hijacked! and five detective stories: two Kate MacKinnon murder mysteries (Deadly Wager and Vengeance is Mine) and two Firefly mysteries (The Adventures of Firefly: The World’s Tiniest Detective and Take Up Serpents), and The G-string Murders.

Further Donations are always welcome to honor another psychologist. Be sure to leave a note regarding which mentor you would like to donate for and any testimonial you might like to give. ﻿