Lewis R. Goldberg is widely known for his foundational work in personality psychology. He has played a central role in the development of the Big Five model of traits (a name that he gave it), he was a pioneer of open science in creating free materials and datasets for the advancement of the field, and he is a much beloved friend, collaborator, and mentor to many.

Lew’s very first class in college was a personality class taught by Gordon Allport. That class introduced him to the problem of how create a taxonomy of personality traits. After receiving his A.B. in 1953, Lew went on to the University of Michigan where he worked with Warren Norman, receiving his Ph.D. in 1958. The two picked up the problem where Allport had left it, and the quest to understand personality structure would become a centerpiece of the rest of Lew’s career. 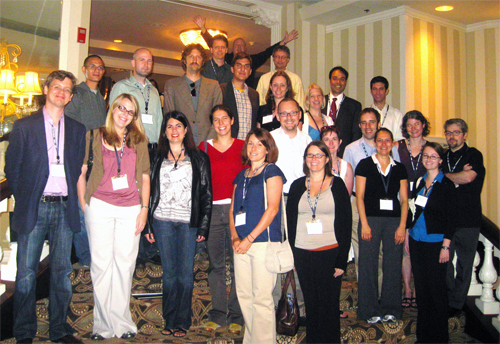 After a two-year stint as a visiting assistant professor at Stanford, Lew arrived at the University of Oregon in 1960, where he would spend the rest of his career as faculty. In addition, he joined the newly founded Oregon Research Institute (ORI) in 1961. ORI has been a second home base for much of Lew’s career. Lew has been a leader in numerous professional societies, a sought-after consultant and panelist for businesses and funding agencies, and he has won just about every award imaginable, including three lifetime achievement awards: Jack Block award from the Society for Personality and Social Psychology, the Saul Sells Award from the Society for Multivariate Experimental Psychology, and the Bruno Klopfer Award from the Society for Personality Assessment.

It is difficult to imagine what the field of personality psychology would look like today without Lew. He was a central figure, perhaps the central figure, in developing the Big Five structural model of personality traits. He has created a widely used resource with the IPIP. His research on clinical and actuarial judgment, dating back to his dissertation, has been enormously influential in personality assessment. The Eugene-Springfield Community Sample, a large longitudinal study that Lew ran out of ORI, has been a critical data source for countless researchers studying traits, interests, values, and more. Lew took over the Hawaii Longitudinal Study after his friend Jack Digman’s untimely death, and it has become an important resource for understanding how personality from childhood onward is related to health and other important outcomes. Perhaps no less important, Lew has always been an informal hub in the social network of the field, known for connecting people and for widely sharing preprints, data, and his own humorous observations in regular email blasts.

In his address for the Bruno Klopfer Award, Lew noted that his favorite IPIP item is “Am able to disregard rules.” As Lew described it, “Breaking rules can be good for you, if the rule-breaking hurts no one else and if one knows what one is doing and why one is doing it.” Lew’s career has exemplified this mindset, marked by deliberate and creative rule-breaking but always with genuine care for those around him. Psychology is much the better thanks to him.

Further Donations are always welcome to honor another psychologist. Be sure to leave a note regarding which mentor you would like to donate for and any testimonial you might like to give. ﻿